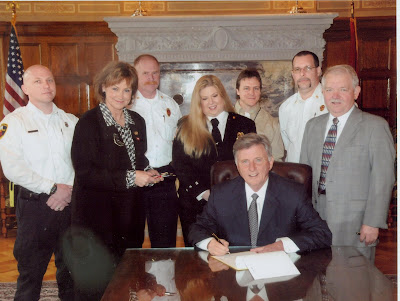 On Tuesday, 10th March 2009 in Little Rock, Arkansas, Governor Mike Beebe signed into law Senate Bill 154 which bans the sale and distribution of novelty and toylike lighters. The Bill by Senator Sharon Trusty, R-Russellville was backed by Attorney General Dustin McDaniel and sets a fine between $25 to $500 for retailers selling the lighters. On September 25, 2007, 15-month old Peyton Edwards and 2-year-old Breydon Edwards of Russellville, Arkansas, died after setting fire to their apartment with a motorcycle-shaped lighter. Twenty cities in Arkansas had already passed local ordinances banning the lighters.

Firesafetyeducator.com's video of Governor Beebe signing the bill, along with an interview with the Governor, is below:

We're looking for your ideas!

Do you have a question about fire safety programming or would you like to share an event or program with other educators and firefighters from across the country?

If so, we want to hear from YOU! Click on the Fire Department Participation Form link below to participate.

Host Dayna Hilton joined the fire service in August 2000. As a second generation firefighter, she is the owner of Firehouse Dog Publishing, LLC™ and the author of the children's fire safety book and audio book, Sparkles the Fire Safety Dog.

Hilton is the host of askafirefighter.net, firesafetyeducator.com, the Playing it Safe blog on Firehouse.com and Safety Talk Radio.

Hilton, an IFSAC certified Public Fire and Life Safety Educator II and Firefighter II, serves on the Arkansas Fire Prevention Commission, is a deputy fire marshal for the State of Arkansas and serves on several national fire service committees. Hilton is an adjunct instructor for the Arkansas Fire Academy and a contract instructor for the National Fire Academy. She is the state educator contact for NFPA for the state of Arkansas, a member of the Home Safety Council's Expert Network and a Firehouse.com Contributing Editor.

Hilton currently appears on PBS KIDS Sprout On Demand sharing fire safety tips with her Dalmatians Sparkles and Spanner and has appeared on FOX and Friends.


View my page on Firefighter Nation